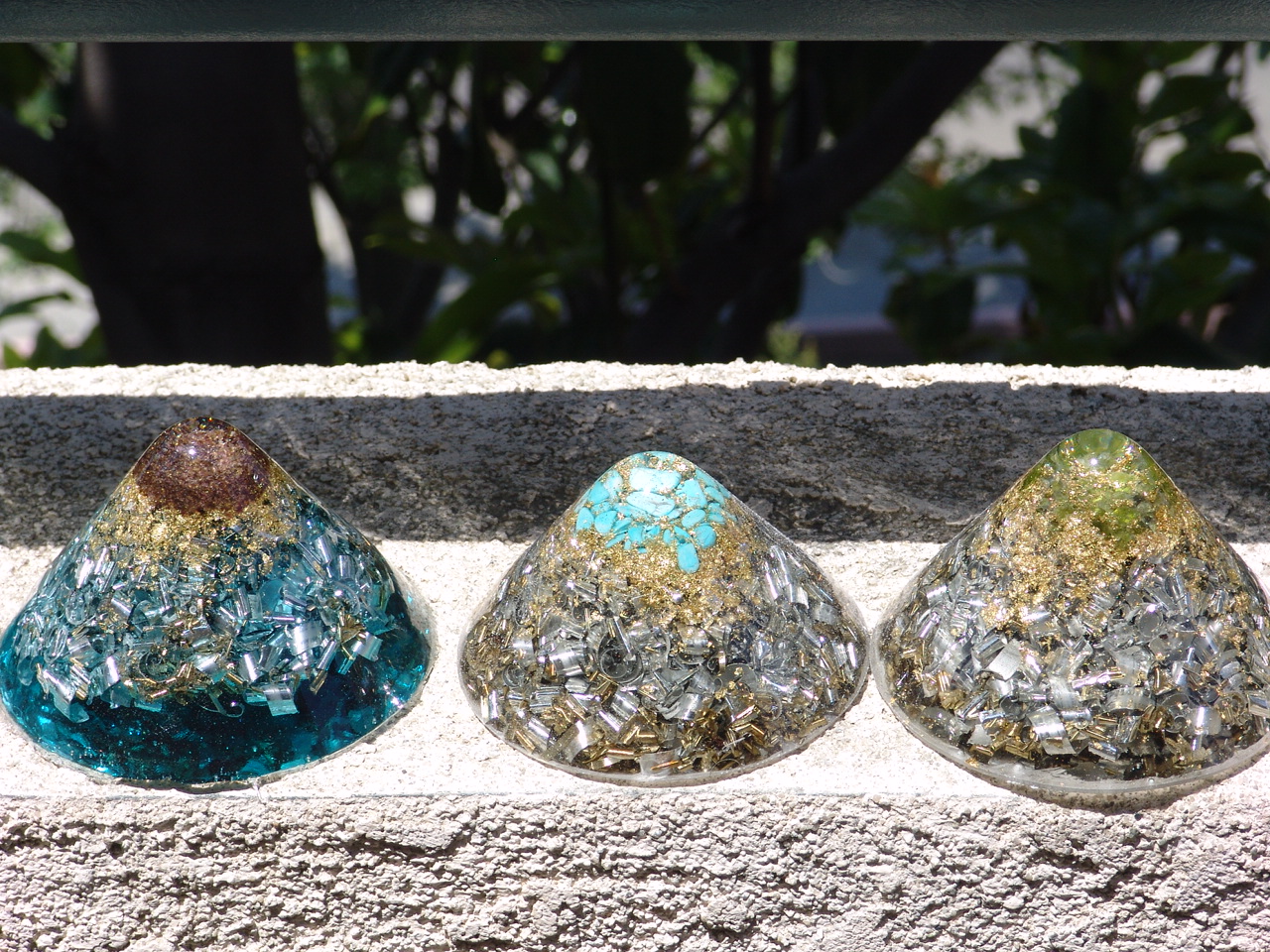 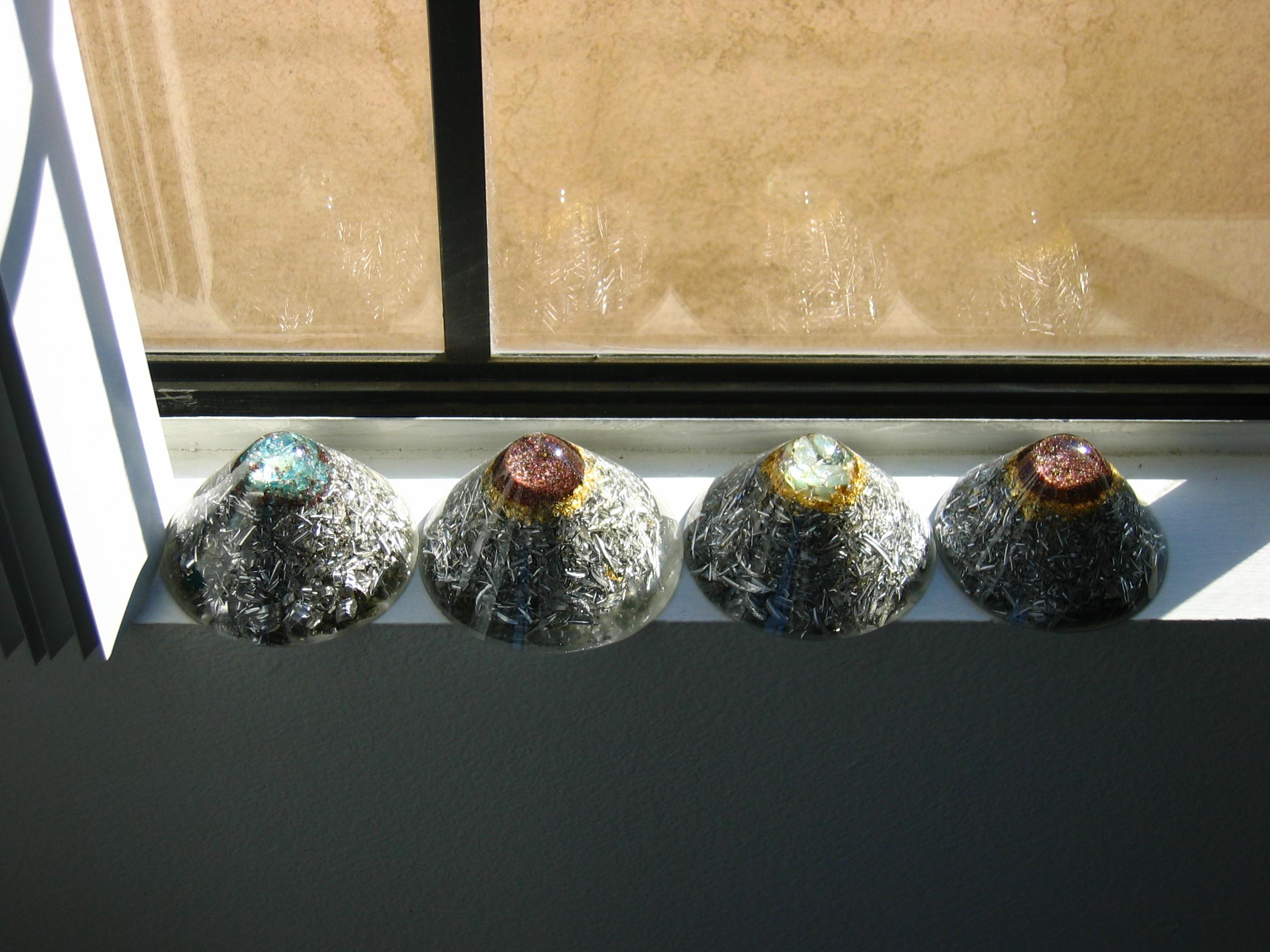 This is some of my finest work to date.
I take dozens of various stones, such as amethyst or rose quartz, or jade, goldstone, and the like and create a beautiful cone showered with Gold Flakes cascading down the sides.
Inside that cone and centered in the piece is a high quality Brazilian Single or Double Terminated Crystal about 3 inches in length, carefully wrapped in copper wire, and surrounded by a clear bed of very fine alufine aluminum shavings. The base is also layered in brass shavings.
The base is showered with garnet powder and the whole creation is then sun cured and blessed with all that I am able to put into it.
Standard or Gifting HHG: 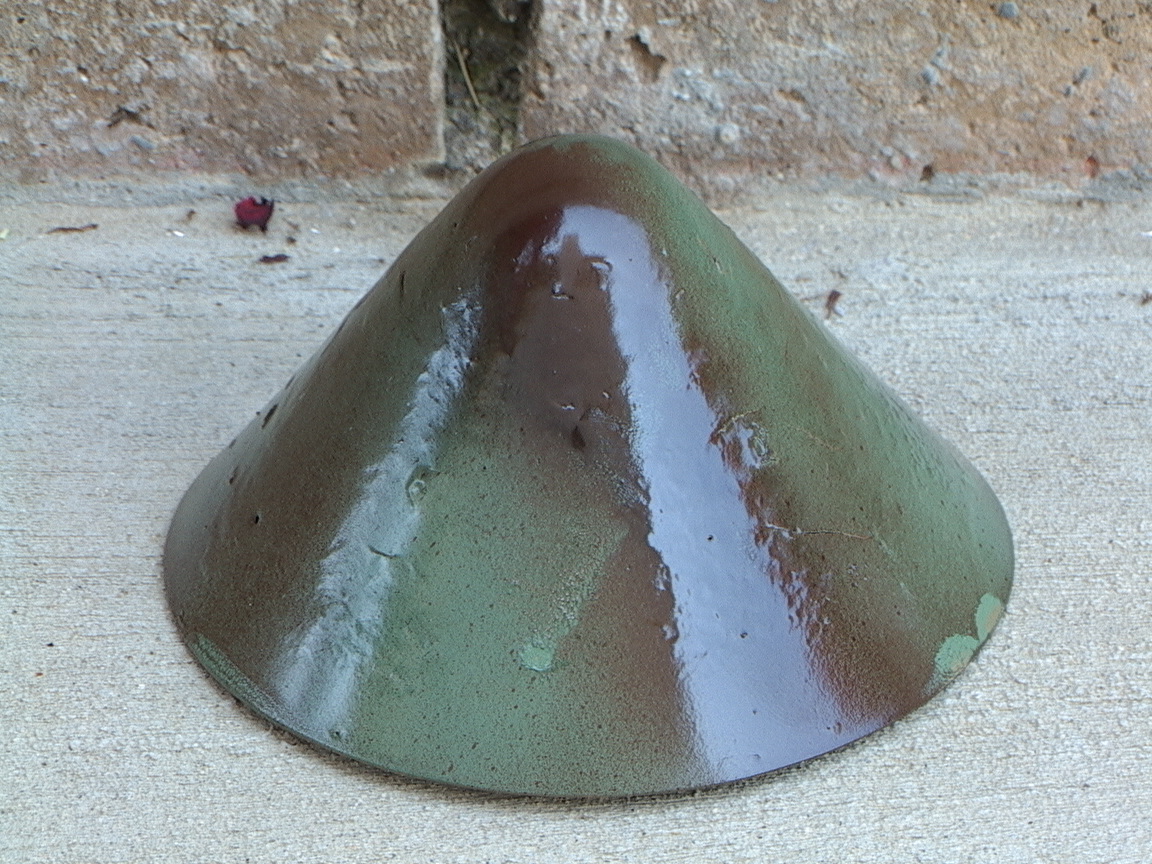 Powerful, cheap, great for gifting
Using general expoxy resin and metal shavings, these are made using quality Arkansas and Brazillian quartz single terminated crystals and colored with either rose quartz or amethyst.
The base is showered with garnet powder and the whole creation is then sun cured and blessed with all that I am able to put into it.
Sunstars 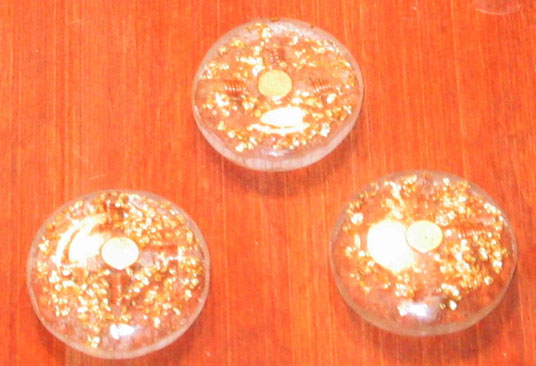 Reactor core and gold
These powerful medallions use lemurian seed crystals and needle cystals wrapped in copper, with neodymium magnets in the core that has ameythyst and a garnet at the base. They now are made with a copper loop for wearing about the neck (chain not included.) From RevTed's Crystal Site:LEMURIAN SEED CRYSTAL Lemurians are said to have been placed here by the original space beings who inhabited Lemuria. These crystals have a warm feeling to them. It is believed that they were programmed to transmit frequencies to other crystals that were forming in the earth, and offer a connection to the many sacred places located upon and under the earth's surface. They create a holographic connection between the inner earth and the earth's surface. Only one Lemurian Seed Crystal is required to connect holographically to all the other seed crystals. This energetic connection forms a magnetic grid around the earth which links us to the inner and outer worlds. Lemurian seed crystals, once thought to originate from only the Joaquim Felicio region of Minas Gerias, Brazil, are now found in Diamatina and Corinto too. Triangular faces sitting atop sides with pronounced horizontal striations are characteristic of these crystals. They are clear quartz crystals, but have a dull look rather than a sheen. Some of them exhibit a pink hue. 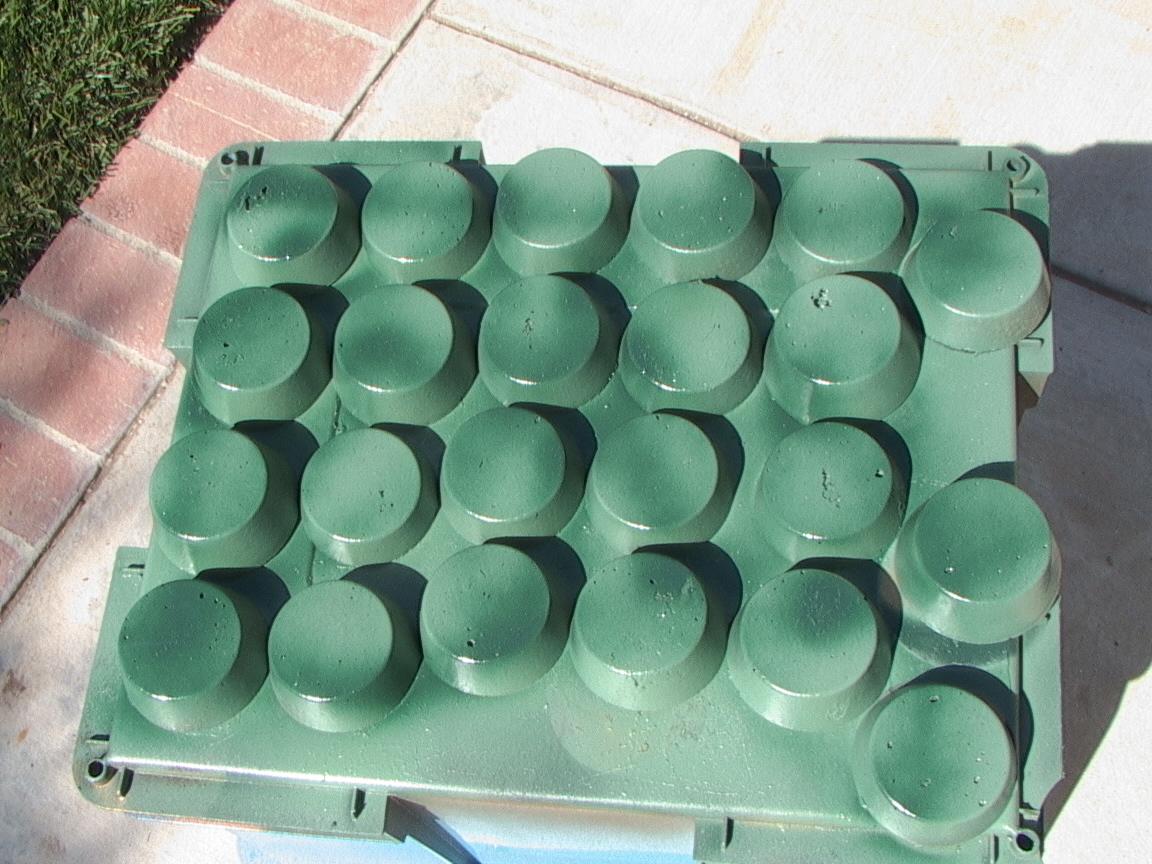 Gift safely, gift wisely
Using either rose, amethyst, citrine, or adventurine quartz, these babies are showered with garnet pieces and energized with a lot of love. Painted forest green. Gift safely, gift wisely
Using finger sized single or double terminated quartz crystals, these larger ETBs are colored with garnet pieces and energized with a lot of love. Unpainted and cast in 5 oz paper cups, and measured by volume to 4 oz. 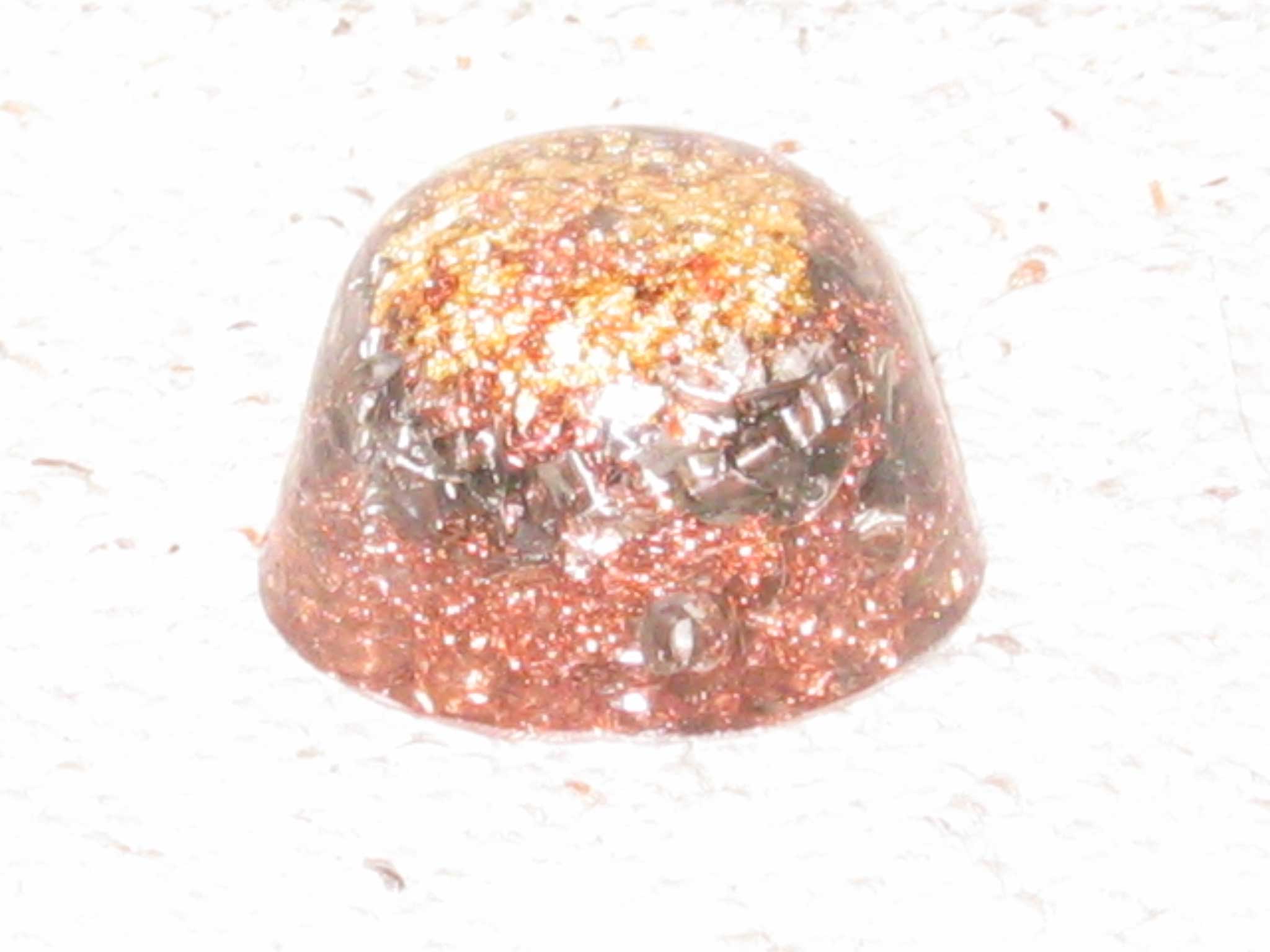 Healing orgone ala Croft
Based upon Don Croft's original design, these SBBs use the best copper coils, neo magnets, ameythysts and garnets, with my own addition, GOLD. From RevTed's Crystal Site: GARNET (red, raspberry, green) This mineral is excellent for health, extracting negative energy from the chakras. It is a stone of commitment to purpose- to self- to others. Garnet reflects the attributes of warmth and understanding. The garnet stimulates the development and movement of the kundalini. This stone is pink to red or green in color. AMETHYST This mineral provides for good spiritual cleansing and development, helping the mind to calm and dwell on higher thoughts. Used also extensively for healing in the healing arts. It is also known for protection from psychic attacks, an excellent stone for activating the crown chakra.
I just received your package. To say I am very pleased is an understatement. These are very loving and very calming. My wife has a hurt shoulder and she is the first to use one of the SSB’s. She wanted me to say thank you. R.O. 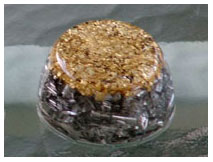 The idea behind the DB Special is to create a portable orgone generator that has one singular purpose: to radiate kindness, compassion, patience, decency, and nobility. After carefully considering the ingredients to make such a device, it was also paramount to invoke a blessing from the Highest I Could Ask For in assistance. These things have cleared rooms, brought laughter to children, and have brightened life wherever they may be found.
I received the DBSC. Perfect size. I keep it in my apron at work. I noticed something strange when a group of handicap people came walking threw produce. One in a wheelchair began making demonic sounds when he got closer to me. Uncontrolled grunts and growls mumbling under his breathe. As he got further away he calmed down. R.M. 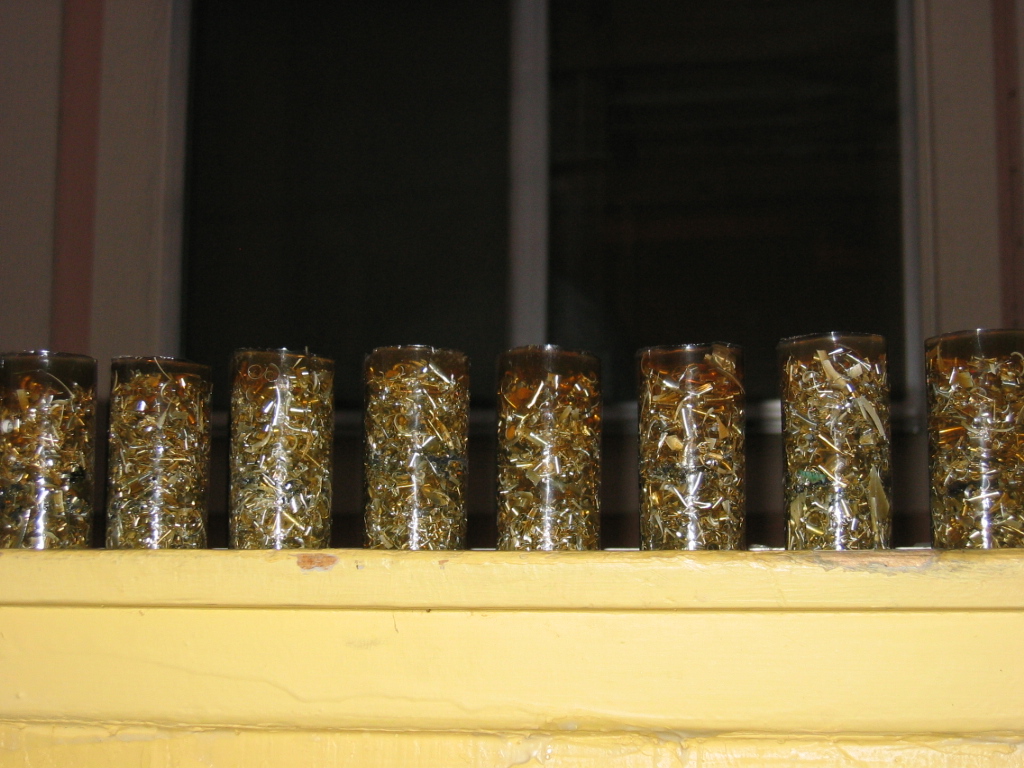 Made to fit a 1 1/2 inch diameter copper pipe, simply tape up one end of the pipe, so that it does not leak. Drop the plug down the pipe. Mix up about 1-2 ounces of resin and pour it down the pipe. let it all gel together, and you are good to go. 1 1/2" in diameter and ready to drop into a copper pipe or ANYWHERE you want this wonderful and POWERFUL orgone creation to go, EP Plugs are yet another fine creation by Mark (Lifeforce) in his untiring effort to produce high quality, low-cost orgone. 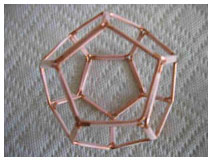 A great idea brought into being. Mark's dodecs, in basic copper or silver brazing and/or finally with 10kt or 14kt gold brazing on the points depending upon availability at gold supplier, are the latest word in sacred geometry creations. The idea of using primary earth, moon, and sun elements as well as the tin and iron found in silver solder, creates all the necessary frequencies that act toward giving a more unified and homogeneous field, creating balance in the energy waveform. These can be made the size of a golfball or the size of a baseball. The taped version, is for the the people who want to add their own little whatever to it themselves. The silver version will have their beams brazed with silver. The complete version is just the silver version with 10kt or 14kt gold brazing on the points combining all 3 metals together. Prices for both sizes are still roughly the same minus a few dollars, because they both take roughly the same amount of time to construct. Also I can seal them in clear resin sphere for an additional charge of about 10 dollars. Let me know ahead of time though, 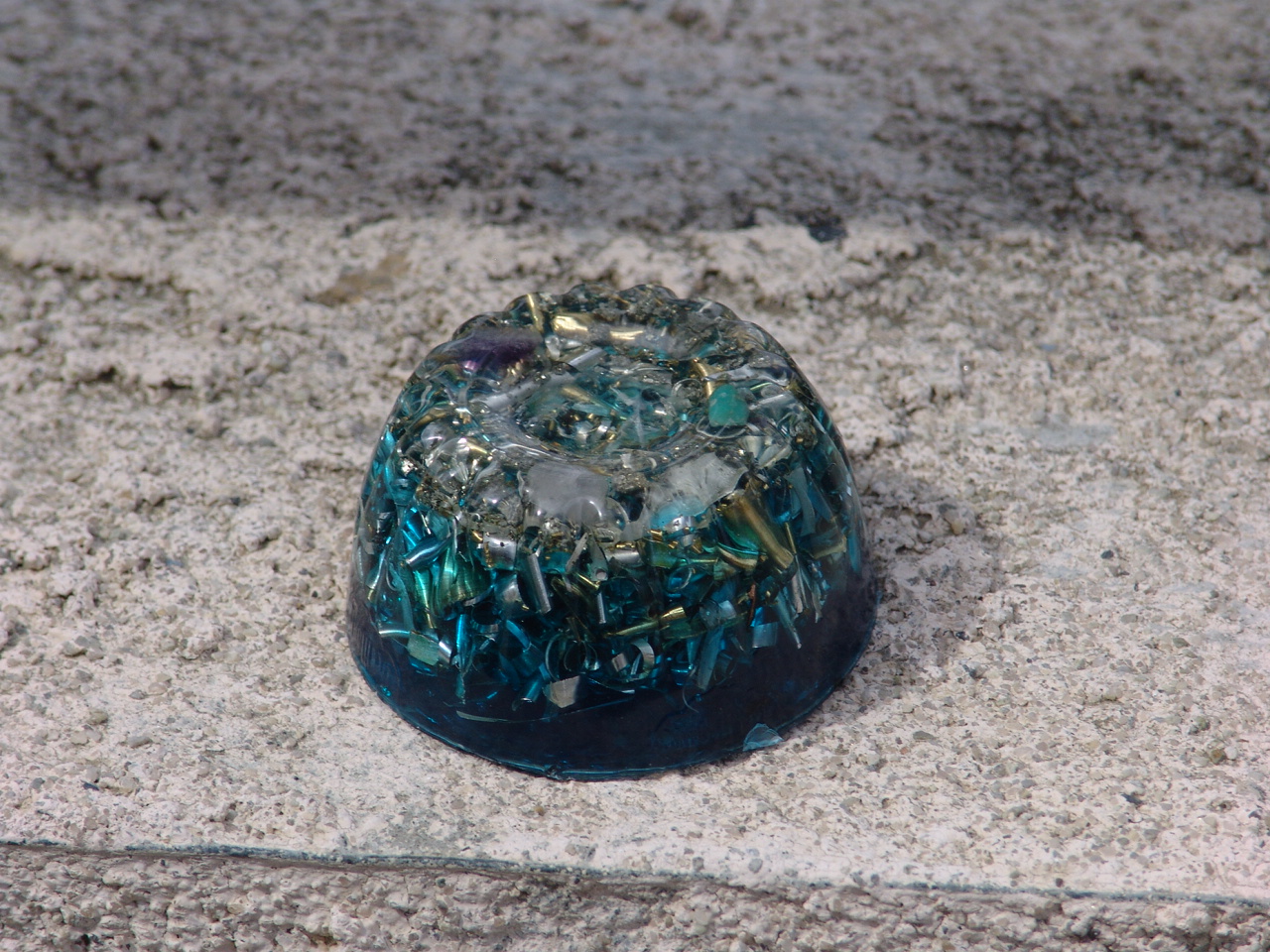 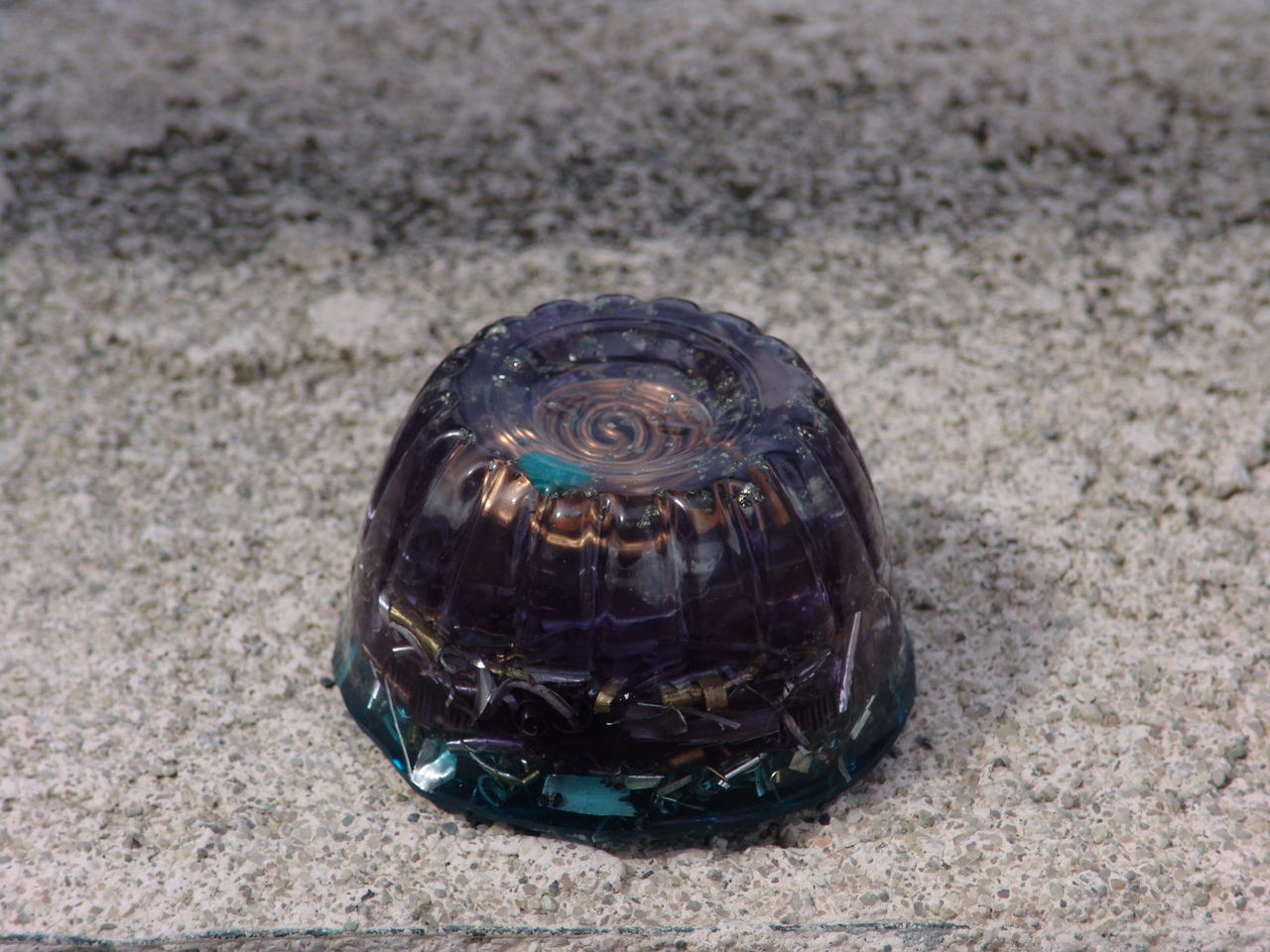 Mark's newest labor, Gardenite and Gardenite Plus, really has a pleasing, powerful, and beautiful appearance to any orgone collection. Modestly priced and perfect for gifts and gifting. 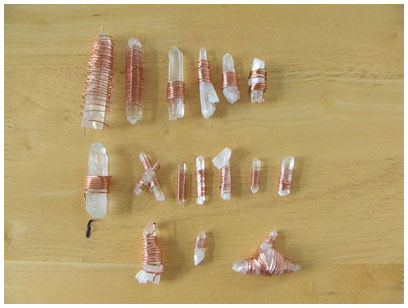 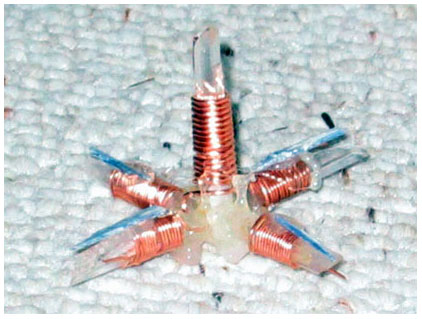